The base is comprised of four quadrant bricks and supported structurally both underneath and above. The set was always going to consist of a rounded base and the challenge was to build a stage with a drum kit as the feature instrument. I decided to use slopes to bring the set up a small way at a relatively soft incline to have a podium big enough for the requirements of a drum kit and figure.
The slopes used in the creation of the base are meant to represent the many facets and patterns of a good drummer, in fact the whole set is designed in many ways to accentuate and represent the concept of rhythm in “brick” form, The trans blue grill tiles were there as well as the sloped bricks from the beginning but then I got a little stuck and had to come back to it a few times before I could keep going.
Really wanting to do scaffolding of some kind I tried at first going with the idea of a square around the kit rising up as well as different styles of lights and different ways of rigging them. Like many things in life as in design, simple often works best and I ended up (for structural reasons as well as because it detracted attention away from the drum kit). just going with 2 scaffolding beams and a simple technic connection that allows the lights to be rotated freely but is still quite secure and most importantly looks cool. The four lights of course represent the four beats in most standard rock music bars.
Next is was drum kit and decoration. I alternated between both of these but the drum kit was definitely the more challenging. For the decorations (lights, fire etc) I built it up to where it was just way too much and then removed things and kept swapping various things around until the design felt right and drew attantion to the spectacle of the drum kit itself rather than away from it. The band’s logo was also printed onto a sticker and placed on both sides on slope bricks specially reserved for this purpose.
The drum kit was challenging for a number of reasons. Firstly the time frame made it hard to order and source pieces that would allow the recreation of a specific cream coloured drum kit so I had to recreate a more generic drum kit with what parts were available. The hole in the kick drum was custom inked and each piece of the set was designed to be as accurate as possible in the representation of a standard rock drum kit. There’s the snare in front of the drummer with the criss cross pattern. There’s the high hat to the left of that and behind is the kick/bass drum. Two tom tom drums on a rack sit over the bass drum and a floor tom sits to the right side of the drummer.
It was particularly challenging do a rack for the floor toms that looked normal and sat comfortably over the bass drum, mainly because of the bar used for the rack. In the end I had to connect the rack in what seems to be a slightly bent way but it worked luckily in recreating the offset angles most toms usually sit at on racks and the bent aspect also helped represent another aspect of the subject’s personality, which is further represented by the four white smoking implements which adorn four corners of the structure. The purple seat is designed to stand out as it is the seat of action and is designed so that the figure can comfortably sit or stand on the seat.
Finally the figure itself, the face and hat in particular were very similar to the subject and the puppy and skateboard help represent the subject’s other interests. The set has been designed so that the figure and accessories can be displayed with the drum kit or the figure can be playing. The fire at the front can also be similarly removed for further variety. 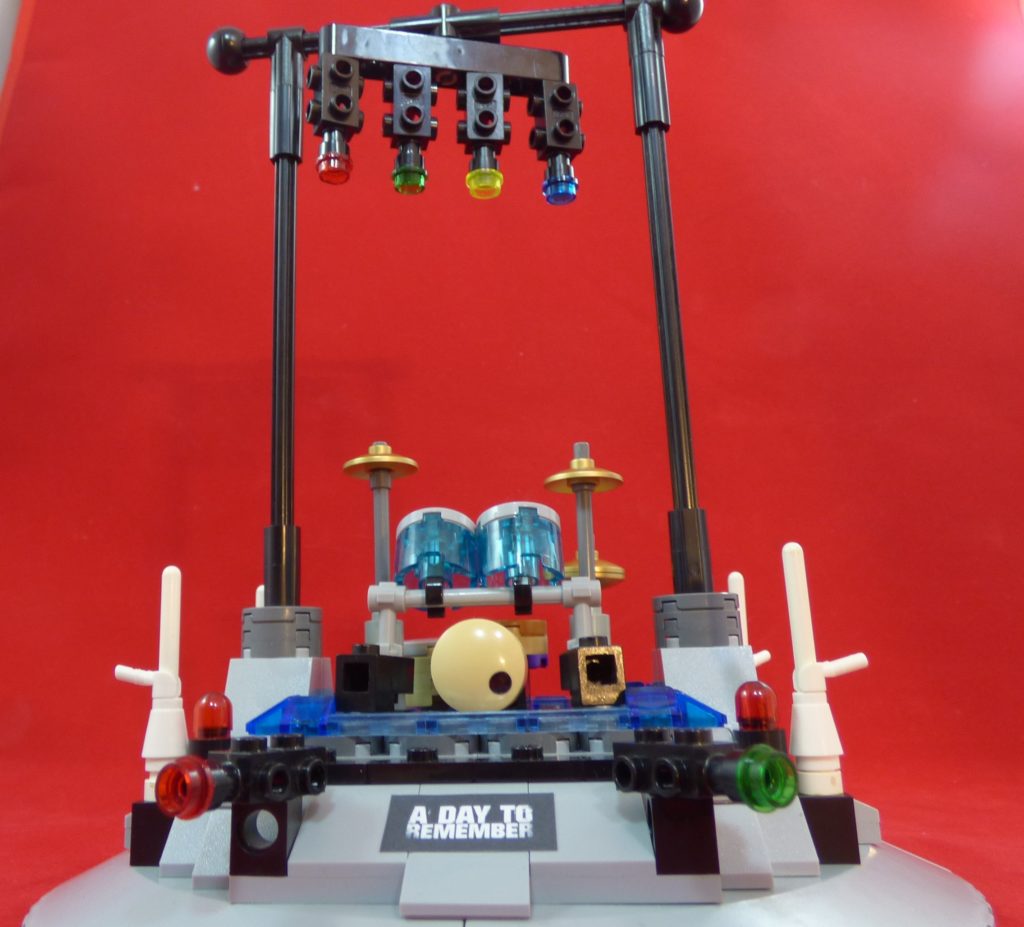 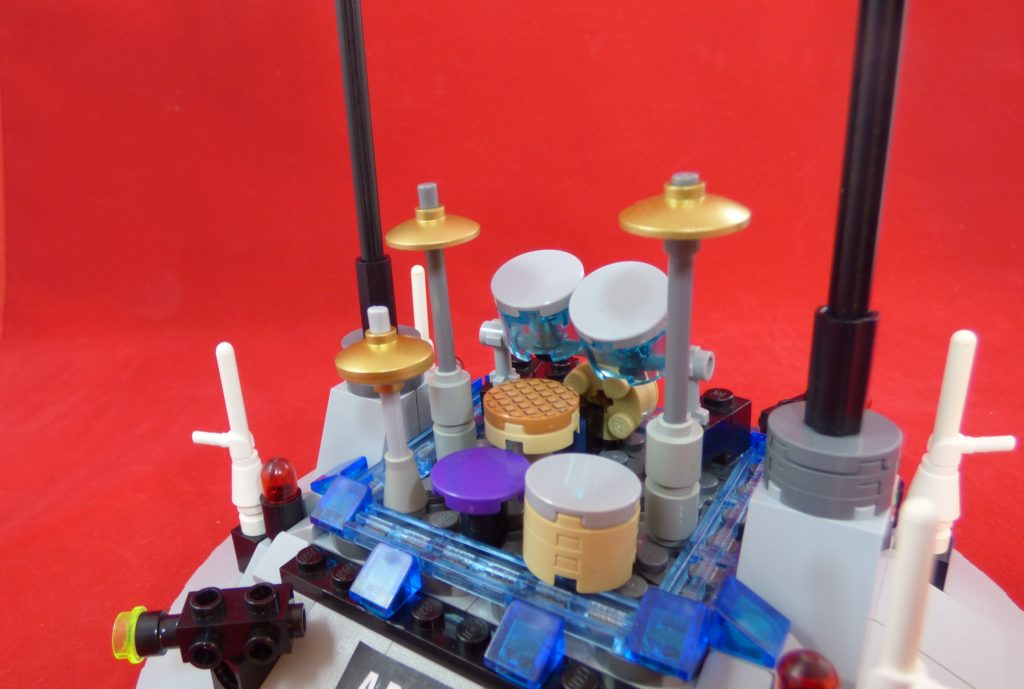 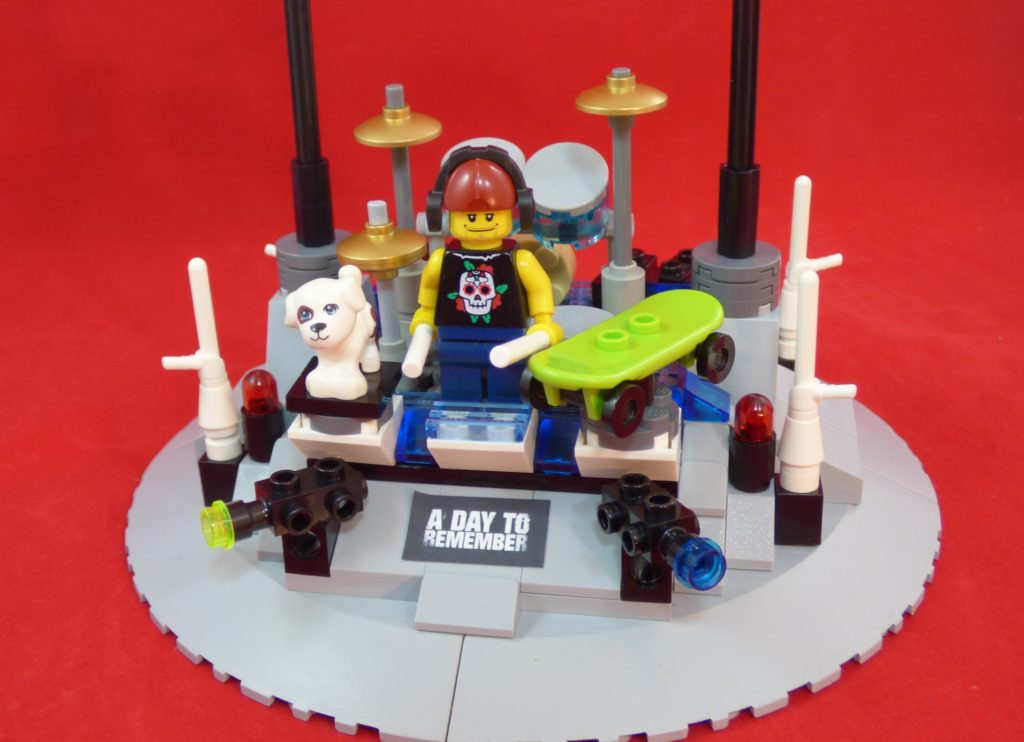 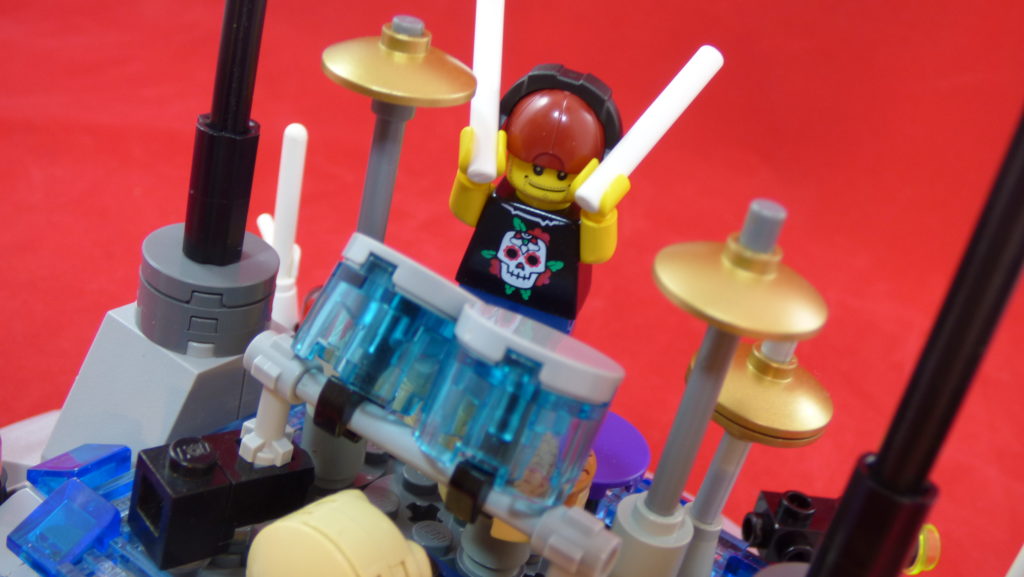 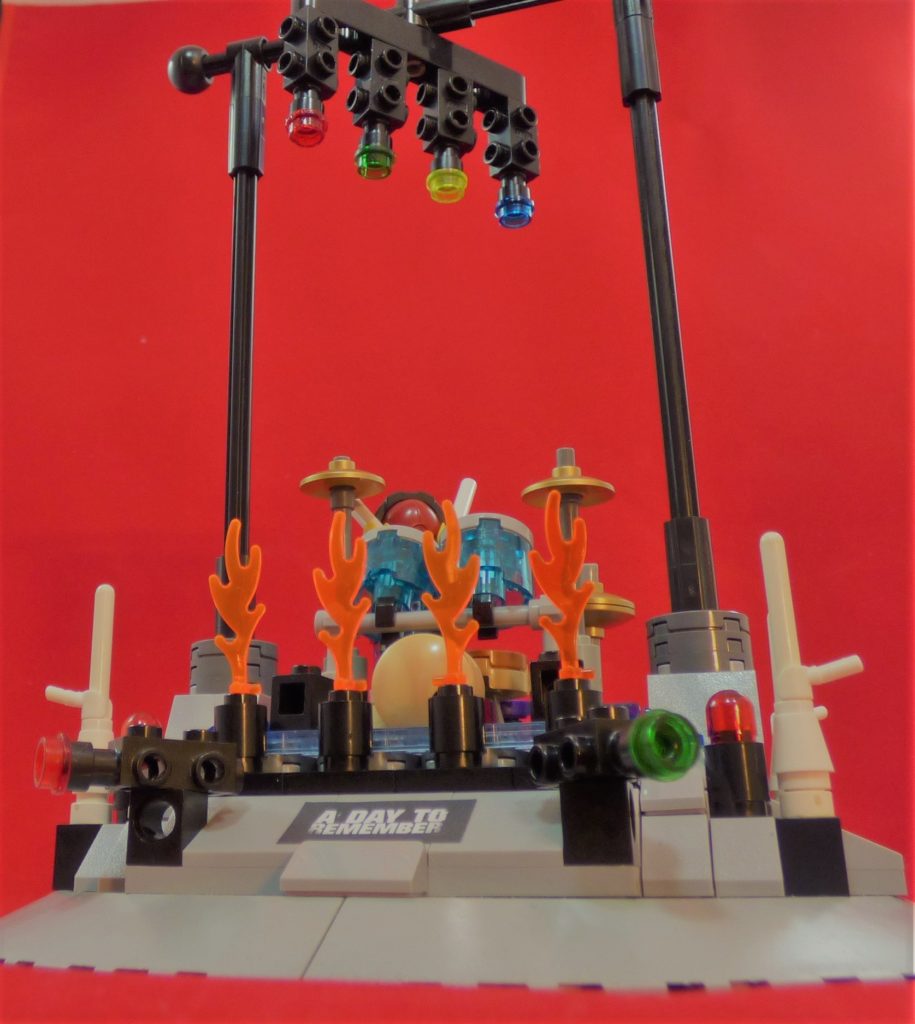